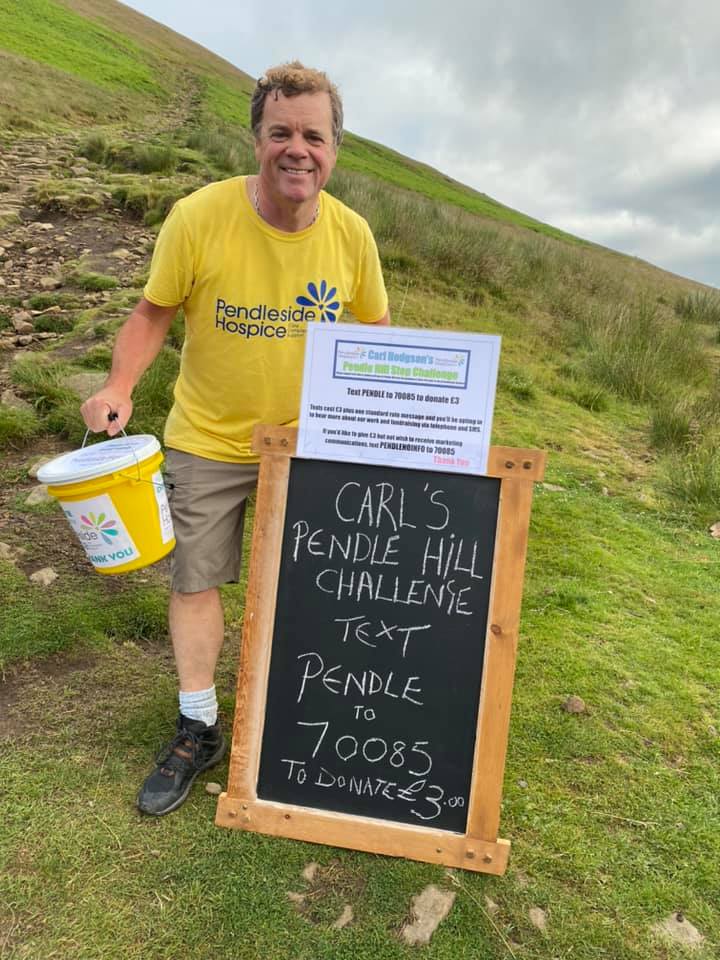 Carl Hodgson has raised £9,000 for Pendleside Hospice by completing an epic challenge which culminated the day before his 50th birthday.

Carl turned 50 on June 28th and decided to use this milestone to raise thousands of pounds by launching a Pendle Hill Step Challenge.

From March 1st, Carl committed to walking up Pendle every day until his birthday weekend – 117 days - and completed the challenge on June 26th and 27th by walking 50 circular laps of landmark hill.

Carl said: “I really enjoyed doing the daily laps - every single day the weather was so different. Friends often joined me on laps and we had a challenge running for people to walk the hill or the equivalent number of steps, then nominate 5 people and donate £10. It was lovely to see everyone getting out there to support the cause and the money started rolling in''. He continued, saying “It really was a mental battle getting through the laps, but I was determined to break the halfway mark on the Saturday and I did…just…walking 26 laps in 17 hours. On Sunday I was determined to step up a gear and power through the laps, which I did with the help and support of my amazing family and friends.The final lap at 6:30pm saw 40 of us walking to the summit together. It really was an emotional moment that I won’t ever forget.”

Carl said he was overwhelmed by just how generous people have been and is thrilled with the amount he has managed to raise for the Hospice, saying: “It really is incredible, and I thank everyone who gave donations via JustGiving, by text to the Hospice, in collection tubs and more''.

Carl said ''The Hospice has helped and continues to help so many families within the area and I truly believe this is the community’s way of saying a big thank you.”

Previously, Carl has walked in memory of his mum Maureen, who was cared for at Pendleside in 2019. He trekked 54 laps of Pendle in 33 hours covering 82 miles and ran the virtual London Marathon last October. He has together raised towards £40,000 for Pendleside through his fundraising challenges.

Carl also plans to run the London Marathon again this year, to raise even more funds for the Hospice.

Carl’s fundraising page is still open. If you would like to make a donation, please visit: https://­www.­justgiving.­com/­fundraising/­carl-hodgson4.